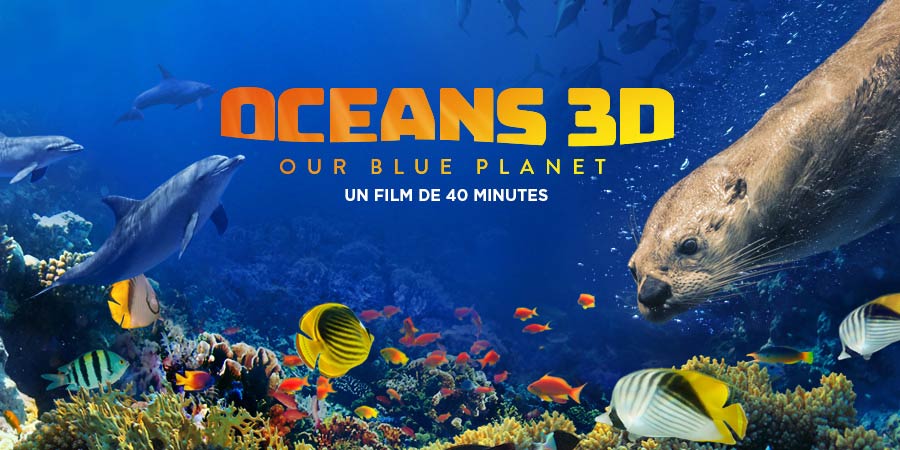 The City of the Ocean is proud to show you Ocean 3D, the blue planet, a new 3D film with breathtaking images.

It is a true odyssey across the largest and the less explored habitat on Earth. The movie explores various areas of the oceans. From littoral waters to abyssal depths, through the poles and coral reefs, the film reveals new stories of the most surprising creatures of the oceans.

In this movie, dolphins dive happily across the waves, fishes from coral reefs use ingenious methods to eat, the clever octopus protects himself thanks to a special method, the sea otter babies snuggle up again their mom, the mobula rays offer a majestic ballet… You will also see sea turtles, whales, polar bears and walrus.

Even if you are a child, an adult, a novice, or an animal report lover, you will enjoy it.

In Ocean 3D, the blue planet, animals are the main characters. They are heroes, and cameras got closer and closer, to record not only the movements, but also the emotions. The latest innovations in technology and snorkelling permitted to record new rushes, going deeper and deeper, for a longer time and as discreetly as possible.

Based on scientific data, Ocean 3D, the blue planet reveals the daily life of sea animals. Where danger is just around the corner, sea life shows exactly the meaning of food chain. We face a real odyssey, made of fights, releases, joy and poetic moments.

We use cookies on our website to provide you with the most relevant experience by remembering your preferences and repeat visits. By clicking "Accept and Close", you consent to the use of ALL cookies. However, you can visit "Customize" to provide controlled consent.
Accept and close Customize
Manage consent

This website uses cookies to enhance your experience when browsing the site. Of these, cookies that are categorised as necessary are stored on your browser because they are essential for the basic functionality of the website to work. We also use third party cookies that help us analyse and understand how you use this website. These cookies will only be stored in your browser with your consent. You also have the option to decline these cookies. But disabling some of these cookies may affect your browsing experience.
Necessary Always Enabled
Necessary cookies are absolutely essential for the website to function properly. These cookies ensure basic functionalities and security features of the website, anonymously.
Functional
Functional cookies help to perform certain functionalities like sharing the content of the website on social media platforms, collect feedbacks, and other third-party features.
Analytics
Analytical cookies are used to understand how visitors interact with the website. These cookies help provide information on metrics the number of visitors, bounce rate, traffic source, etc.
Advertisement
Advertisement cookies are used to provide visitors with relevant ads and marketing campaigns. These cookies track visitors across websites and collect information to provide customized ads.
Save & Accept